Sometimes an ear of corn is just an ear of corn, but occasionally it’s something else altogether. Sigmund Freud and his stogey can relax, I’m talking about Charles C. Mann’s revelations in 1493: Uncovering the New World Columbus Created (Vintage, 2012). In this compelling book, Mann uncovers history and reads the metaphorical tea leaves on our dinner plates. 1493 delves into the new biological era, the Homogenocene, that was touched off by European trade and exploration, in which globalization created a world that’s much more uniform and that continues to change societies in ambivalent ways.

Christopher Columbus, Hernán Cortés, John Smith, and others were chasing the dream of an oceanic route to China, but what they accomplished was a world-spanning trade system that disrupted ecologies and societies across Europe, North and South America, Africa, and Asia. Some plants and domesticated animals were knowingly transplanted to the Americas. Others were taken from the Americas around the world. The consequences of relocating all these resources couldn’t be foreseen. Corn (or maize, as Mann names it), a native of the North American continent, is a tasty vegetable, but it is also a symbol of this new ecological, economic, and social world. Food plants such as corn, potatoes, and sweet potatoes from the Americas were the sources of a new food security, which in turn, lay the foundation for population explosions in Europe and China. Corn, potatoes, and sweet potatoes led to the development of modern industrial agriculture, which relies on improved crop yields, high-intensity fertilizers, and factory-made pesticides. These same crops also were followed by new crop diseases and pests, deforestation, erosion, flooding, and associated with these, social destabilization.

Then there were the accidental transplants. Some of these, like honeybees, might be seen as beneficial. Others, like dandelions and earthworms, caused deep alterations in the ecosystems into which they spread. But there can be no doubt that epidemic diseases, and the hosts that carry and spread them (like rats and mosquitoes), devastated the Americas, directly or indirectly killing a vast majority of the indigenous population. 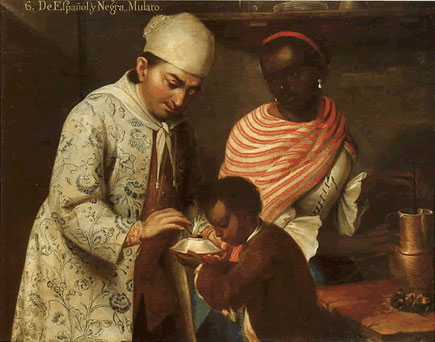 Mann highlights the many changes wrought by the voluntary and forced migrants—human or trade good, mineral or microbe, flora or fauna—as they moved around the globe and the consequences of these movements. The Homogenocene, ongoing now for more than half a millenium, is at best, a cautionary tale. My apple pie, that quintessential American dessert, wouldn’t be possible without apples and honey bees from Europe, sugar from New Guinea (and in more recent history, the forced labor that made sugar an affordable commodity), butter from European cows, or wheat from the Middle East. But when I read about the newest proposal to introduce bacteria to control the odor from bird droppings in San Diego or the newest foodie fashion for quinoa, what I see is the continually spreading ripples of Columbus’s search for China 500 years ago. Not always a cheerful read, to be sure, but I certainly recommend Mann’s 1493 to any Geeky Foodie who likes to toss social and environmental politics, history, and economics with her locally-grown micro-greens.

Do you think a book like 1493, which is not centrally about food and cooking, should be recommended in a foodie blog? What foodie books (geeky or otherwise) are you reading?

My Book on Amazon